The greatly anticipated summer exhibition at Tate Liverpool has all the hallmarks of a blockbuster–record-breaking attendance at its previous locations and rave reviews emerging from the press event. Does it deserve the hype?

One of the best exhibitions I’ve ever seen was Matisse/Picasso in 2002 at Tate Modern.  Looking at so many stunning works of art and how they influenced one another right in front of my eyes was a transformative experience.  I’d never realised how talkative art could be and how well-considered curation can have so much power.  It deepened my love for Matisse, brought me something close to admiration for Picasso, and made me even more excited to be studying art history with one of the exhibition curators.  It set a standard for a style of exhibition comparing art and artists which has become ever more popular in the last decade, but few shows have reached the same level of success.

Perhaps the only way to top putting two well-known artists side by side is to add another.  Possibly someone who doesn’t appear to have any connections to the others until you start to dig a little deeper.   The art historical connection between JMW Turner and Claude Monet is pretty solid; Pissarro wrote about he and Monet’s visit to the National Gallery in London and seeing Turners on display,  which provided both an influence and a benchmark. But Cy Twombly? Originally the third artist was going to be Mark Rothko, until curator Jeremy Lewison learned that Twombly had collected letters from both artists and had a catalogue raisonné of Monet’s works.  It’s a measure of how much has changed in the last decade that a major show like this, originating in Stockholm, would travel to Stuttgart and Liverpool, not Berlin and London.

The overarching theme in Turner Monet Twombly is works made in the last 20-30 years of each artist’s life, when they had achieved critical acclaim but were still pushing themselves creatively and considering deeper issues like mortality and loss.  Galleries are arranged by themes like “Beauty, Power and Space” “The Vital Force” and “A Floating World”.  Tate has reversed the usual arrangement of their fourth floor galleries so that you travel counter-clockwise through the space, which makes a welcome change and also allows large groups to enter the exhibition directly from the service elevator.

It’s hard not to be overwhelmed as you enter the first gallery on the ground floor.  Turner’s Hero and Leander hangs near Twombly’s Hero and Leandro series.  Monet’s seascapes from the coasts of Normandy and Brittany vividly illustrate the power of nature.  Seeing Turner alongside these two instead of his contemporaries reminds you how utterly, shockingly modern he is.  Someone who insisted his unfinished works had every right to hang alongside his masterpieces was a bit ahead of his time. 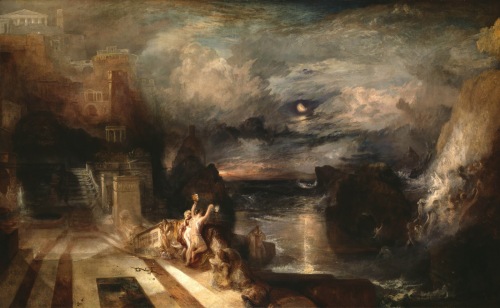 JMW Turner “The Parting of Hero and Leander”. Image: Tate

Twombly was not interested in becoming a great painter as much as perhaps becoming a great artist.  If you try to judge his work on technical merits you’re only going to be disappointed.  Yet he maintained a fascination with the power of myth that appears again and again throughout this exhibition.  His Hero and Leander avoids the figurative entirely, focusing on the turbulent waters of the Hellespont in which Leander drowned.  Canvas by canvas the waves subside until all that’s left is a fragment of a Keats sonnet about the mythic couple, which Twombly has rendered as such:

all his amorous breath

Somehow it’s as easy to imagine Hero’s pain through a few words as it is by looking at her anguished gestures.

The opening gallery alone is a pretty impressive exhibition but when you arrive at the fourth floor, the conversation between these artists really begins to get going.  Sometimes the paintings murmur quietly to each other, sometimes they shout.  Twombly’s Untitled 2007 is a series of giant red peonies on a brilliant yellow background that practically bellows across the gallery to Monet’s The Water Lily Pond.  The water lilies float in their tranquil pond, taking in the sorrow of the world and radiating a sense of calm. 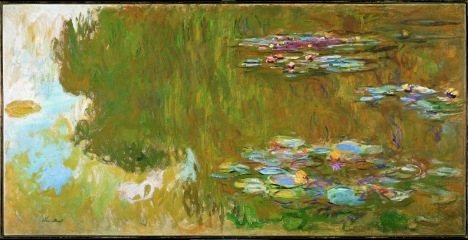 Finding new connections and looking at familiar works in a fresh light, you can’t help but feel lifted by the sheer joy of discovery.  Monet’s and Turner’s scenes of Waterloo Bridge and Venice illustrate the dialogue between these two better than almost anything else.  Monet saw Turner’s use of light and colour and raised it to another level.  Twombly’s Paessagio, for all its abstraction still brings to mind dark forests dripping against the sky.  Those seem to be more connected to nature than many of his other works, particularly the garish Camino Real (III) which is overly brash and disrupts the harmony of the rest of the exhibition.  His blues and greens in Paessagio perhaps echo Monet’s palette most closely, and I went back to gaze at not the largest or most abstract water-lily painting, but at this one 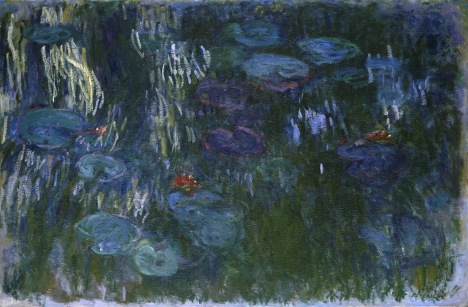 As the Guardian’s Jonathan Jones put it:

It seems to have more colours in one spot of its surface than Twombly can muster across an entire epic. You do not need the Hellespont to drown in: Monet’s pond is deep enough.

I couldn’t have said it better myself.

Turner Monet Twombly: Later Paintings is on at Tate Liverpool until October 28.